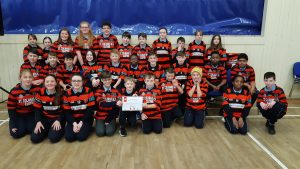 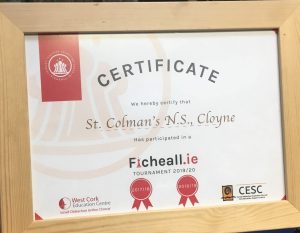 On Tuesday, February 12th, Cloyne N.S. took part in the second annual East Cork primary schools’ chess tournament. This year, it was held in the Community Hall in Carrigtwohill. We entered four teams from Rang III and Rang IV in the Budding Masters competition, crossing chess pieces with six other schools. Wearing the famous red and black jersey, our intrepid competitors battled for four hours over six championship matches and called upon all their reserves of strategy and concentration. In the end, thirty-two weary but happy warriors trooped onto the bus, swapping tales of gripping encounters from the day’s play.

The tournament itself was very well organised and the feedback from the children and teachers involved was overwhelmingly positive.  I would like to compliment the children on their preparation, whole-hearted participation and good behaviour throughout the day.  Míle buíochas to Mr. Collins, Ms. Savage and Ger O’Brien for their involvement in the tournament.  Finally, a special word of appreciation to the Parents’ Association for contributing 50 % of the total cost of entry and bus trip.  (Mr. Collins, Rang III & IV)